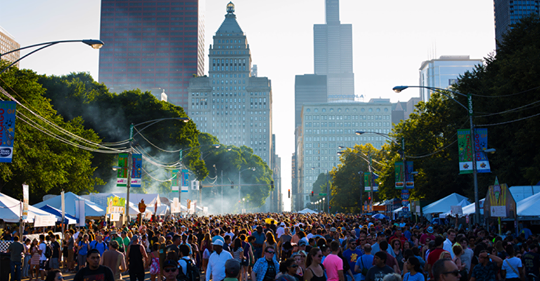 All large gatherings planned for summertime in Illinois may need to be canceled, Gov. J.B. Pritzker said Thursday.

When asked during his daily coronavirus briefing if organizers of major summer events should plan on limiting crowds or making adjustments, Pritzker said he thinks “everybody needs to think seriously about canceling large summer events.”

“Until we have a vaccine, which is months and months away, I would not risk having large groups of people getting together anywhere,” Pritzker said. “And I think that’s hard for everybody to hear, but that’s just a fact. They’re just, you know, even with testing and tracing and treating, it’s necessary for us to begin to make changes. It isn’t enough for me to say that it’s okay to have a big festival with a whole bunch of people gathering together.”

Thursday marked one calendar month since the start of Illinois’ stay-at-home order and many residents hoped summer would bring about a change from the isolated life the coronavirus crisis brought. The Chicago area is home to several major summer events and large festivals like Lollapalooza, Pitchfork, the Taste of Chicago and more – all of which generate thousands of attendees.

Earlier this month, Chicago Mayor Lori Lightfoot said Lollapalooza remained “on schedule,” but organizers have delayed their lineup announcement for the four-day music festival, which usually releases its headliners this time of year and opens ticket sales.

On March 24, Lollapalooza organizers tweeted “While we stay in close contact with local officials, we are well underway with planning for Lolla to take place as soon as it’s safe for us all to be together in Grant Park.”

Meanwhile, the total number of confirmed coronavirus cases across the state climbed over 16,000 Thursday, with 528 deaths, health officials announced.

Cases have been reported in more than 80 of Illinois’ 102 counties.

But despite their continual rise, officials said the numbers showed a “glimmer of hope.”

“The rate at which they’re increasing is less and that is a good sign,” Dr. Ngozi Ezike, director of the Illinois Department of Public Health, said Wednesday. “We’re not seeing the exponential growth we were seeing before.”

Health experts have stressed that it remains unclear when Illinois will reach its peak number of cases, though a recent projection estimated the peak could arrive this weekend. Still, Illinois’ stay-at-home order is set to continue until April 30, unless otherwise extended, and Pritzker said he doesn’t believe it will be lifted sooner.

“Look, you know, we talk a lot about peaking and we talk a lot about how we’re bending the curve, the curve is still upward trajectory,” Pritzker said. “And so just because we’re bending the curve does not mean it’s bending down yet. And so people need to understand that, that it is unlikely that that we will be able to lift this stay at home before April 30. And indeed, as we approach April 30, we will be thinking about what are the restrictions or rules that we need to set going forward after April 30? Because it isn’t going to be unlike what some have said, you know, at the federal level. It isn’t going to be that all of a sudden you’re going to drop the you know, stay-at-home and every other restriction.”

Illinois has been working to bring once-shuttered hospitals back online and has transformed Chicago’s McCormick Place convention center into an alternate care facility for hundreds of patients with mild symptoms should hospital capacity be overwhelmed.

Across Illinois and the country, Americans are being encouraged to wear masks or face coverings if they have to head outside.

“I am worried about people throwing caution to the wind and seeing a nice day outside,” Pritzker said. “And thinking that we’re they’re not in danger. You heard Dr. Ezike talking about how some young people think that they’re invincible, that this virus won’t affect them. So everybody needs to know that if we are improving – and it’s still up in the air – but if we are improving here in the state, it is because people are staying at home. That is something to keep in mind.”