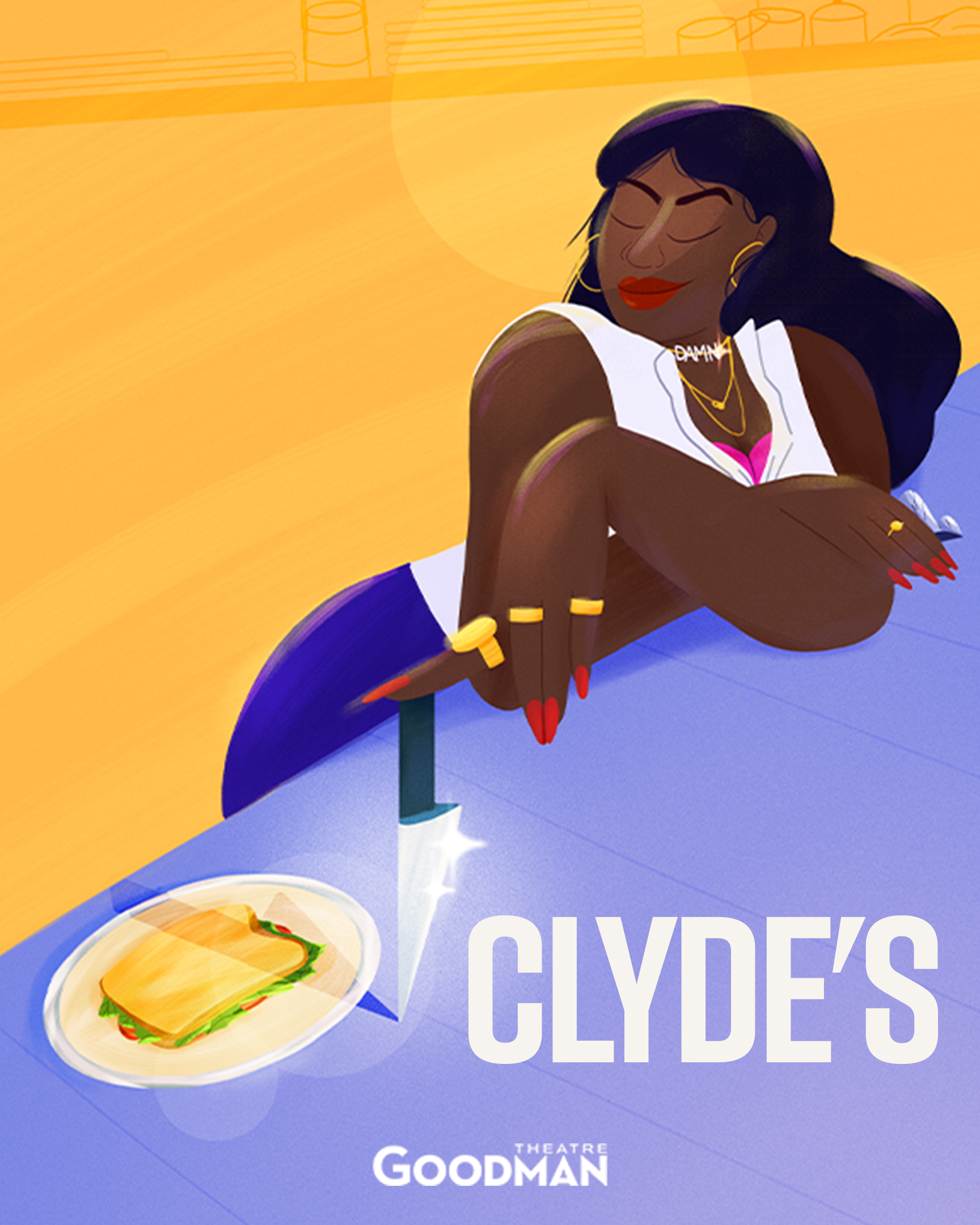 Yesterday, Monday, September 19, 2022, The National Association of Black Journalist (NABJ) granted me access to attend the incredible stage play “Clyde’s.”  At this performance, the principal role of Clyde, usually played by De’Andre Aziza, who is currently out (non-Covid-related), was EXCELLENTLY played by Danielle Davis. She has been standing in as Ms. Aziza’s understudy for the last five performances, and will continue playing Clyde until the principal fully recovers. From Director Kate Whoriskey: “While we were met with the challenge of having to make the show without our principal actor, we want to celebrate the work of our understudy.”

I HIGHLY RECOMMEND THIS STAGE PLAY AND I GIVE IT 4 STARS!!! 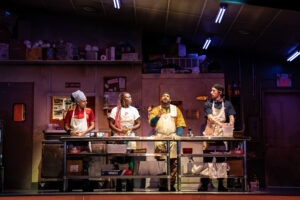 “I am beyond thrilled to be returning to the Goodman Theatre, which has been so instrumental in nurturing me a theater artist,” said playwright Lynn Nottage, whose works at the Goodman include Sweat (2019), By the Way, Meet Vera Stark (2013), Ruined (her Pulitzer Prize-winning world-premiere Goodman commission and co-production with Manhattan Theatre Club, 2008) and Crumbs from the Table of Joy (2006). “I can’t wait to share Clyde’s with the Chicago community, and with audiences in Los Angeles at Center Theatre Group later this fall.”

Director Kate Whoriskey, whose world-premiere collaborations with Ms. Nottage include Sweat (2015), Ruined (at the Goodman, 2008), Fabulation or The Re-Education of Undine (2004) and Intimate Apparel (2003) said, “I’m thrilled to work with Tony Award nominee De’Adre Aziza, Nedra Snipes and Garrett Young—as well as to continue developing this play with our original collaborators Reza Salazar and Kevin Kenerly.” 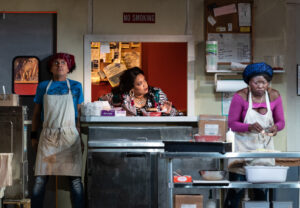 Chicago audiences are first to experience Clyde’s following its Broadway run, where it earned five Tony Award nominations and was critically hailed as a “delightful new play” (New York Times) with “feisty comedy on the menu” (Washington Post), a “winning recipe” (Deadline) with “brilliant writing” (Daily Beast), and a “flavor-bomb of a new comedy about survival, second chances and digesting whatever life serves up” (Variety).

“It’s enormously exciting to welcome audiences to our new season with a sensational new work from one of the Goodman’s most-produced playwrights,” said Robert Falls. “We’re also thrilled to welcome back Lynn’s longtime artistic partner, director Kate Whoriskey, and to collaborate with our friends at Los Angeles’ Center Theatre Group to extend the life of this wonderful production.”

Added Center Theatre Group Managing Director / CEO Meghan Pressman, “Clyde’s was a highlight of last year’s Broadway season, and our partnership with Goodman Theatre allows us to bring this outstanding production to Los Angeles. Clyde’s will be the second time we have produced Lynn’s work in Los Angeles, and we are thrilled to bring this bold, engaging, and entertaining play to our audiences for its West Coast premiere.” 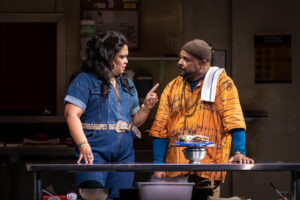 A playwright and a screenwriter, Lynn Nottage is the first woman in history to win two Pulitzer Prizes for Drama. Her plays have been produced widely in the United States and throughout the world. Chicago credits include Ruined (Goodman Theatre); Sweat (Goodman Theatre); By the Way, Meet Vera Stark (Goodman Theatre); Crumbs from the Table of Joy (Goodman Theatre; Steppenwolf) and Intimate Apparel (Steppenwolf). Broadway credits include her plays Clyde’s (2ST) and Sweat, and the libretto for the musical MJ. Other work includes the libretto for the opera Intimate Apparel (Lincoln Center Theater); co-curating the performance installation The Watering Hole (Signature Theater); the libretto for the musical adaptation of The Secret Life of Bees; as well as her plays Mlima’s Tale; Fabulation, or the Re-Education of Undine; Crumbs from the Table of Joy; Las Meninas; Mud, River, Stone; Por’knockers and POOF!. She has also developed This is Reading, a performance installation in Reading, Pennsylvania. Ms. Nottage is the recipient of a MacArthur “Genius Grant” Fellowship, among other awards, is an associate professor at Columbia University School of the Arts and is a member of the Dramatists Guild.

Kate Whoriskey is a New York-based theater and opera director. On Broadway, she has directed Clyde’s, Sweat and The Miracle Worker. Off-Broadway credits include All the Natalie Portmans at MCC; Sweat, Manhatta and Ping Pong at The Public; Aubergine, Inked Baby and Fabulation at Playwrights Horizons; Her Requiem at Lincoln Center; How I Learned to Drive and Cardinal at Second Stage; Oroonoko at Theatre for a New Audience; and Ruined and Tales from Red Vienna at Manhattan Theatre Club. Regionally, she has worked at the Goodman, A.R.T, the Guthrie, the Huntington, the Geffen, South Coast Rep, Sundance Theatre Lab, New York Stage and Film among others. Internationally, her work has been seen at the Chatelet in Paris and Theatro Municipal Opera in Rio de Janeiro and Carriage Works in Sydney. She also directed Turn of the Screw at Mannis. Teaching experience includes Princeton, NYU and UC Davis. She was recently awarded Best Director from the Drama League for her production of Clyde’s. 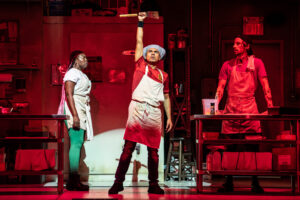 THE COMPANY OF CLYDE’S 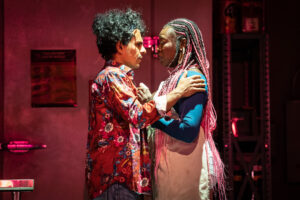 Touch Tour and Audio-Described Performance: Saturday, October 8, 12:30pm Touch Tour; 2pm performance – The action/text is audibly enhanced for patrons via headset. NOTE: Touch Tours for the 2022/2023 Season will not have access to the stage due to current health and safety protocols, but will feature alternate pre-show sensory introductions.

Open-Captioned: Sunday, October 9 at 2pm – An LED sign presents dialogue in sync with the performance.

Please note: Our current Health and Safety Protocols require masks while in the theater. These protocols are subject to change and patrons will be notified in advance of their performance of any shift in our policies. Review our current policy at GoodmanTheatre.org/Protocols.

ABOUT THE CO-PRODUCING THEATERS

Center Theatre Group, one of the nation’s preeminent arts and cultural organizations, is Los Angeles’ leading nonprofit theatre company, which, under the leadership of Managing Director / CEO Meghan Pressman and Producing Director Douglas C. Baker, and in collaboration with the five Associate Artistic Directors, Luis Alfaro, Lindsay Allbaugh, Tyrone Davis, Neel Keller, Kelley Kirkpatrick, programs seasons at the 736-seat Mark Taper Forum and 1,600 to 2,100-seat Ahmanson Theatre at The Music Center in Downtown Los Angeles, and the 317-seat Kirk Douglas Theatre in Culver City. In addition to presenting and producing the broadest range of theatrical entertainment in the country, Center Theatre Group is one of the nation’s leading producers of ambitious new works through commissions and world premiere productions and a leader in interactive community engagement and education programs that reach across generations, demographics, and circumstance to serve Los Angeles. centertheatregroup.org

Chicago’s theater since 1925, Goodman Theatre is a not-for-profit arts and community organization in the heart of the Loop, distinguished by the excellence and scope of its artistic programming and community engagement. The theater’s artistic priorities include new play development (more than 150 world or American premieres), large scale musical theater works and reimagined classics. Artists and productions have earner two Pulitzer Prizes, 22 Tony Awards and more than 160 Jeff Awards, among other accolades. The Goodman is the first theater in the world to produce all 10 plays in August Wilson’s “American Century Cycle.” Its longtime annual holiday tradition A Christmas Carol, now in its fifth decade, has created a new generation of theatergoers in Chicago. The Goodman also frequently serves as a production and program partner with national and international companies and Chicago’s Off-Loop theaters.

Using the tools of the theatrical profession, the Goodman’s Education and Engagement programs aim to develop generations of citizens who understand the cultures and stories of diverse voices. The Goodman’s Alice Rapoport Center for Education and Engagement is the home of these programs, which are offered free of charge for Chicago youth—85% of whom come from underserved communities—schools and life-long learners.

As a cultural and community organization invested in quality, diversity and community, Goodman Theatre is committed to using the art of theater for a better Chicago. Goodman Theatre’s Action Plan for Inclusion, Diversity, Equity, Anti-Racism and Access (IDEAA) was born out of the belief that progress means action, which includes building on the decades-long commitment to using art, assets and resources to contribute to a more just, equitable and anti-racist society.

Goodman Theatre was founded by William O. Goodman and his family in honor of their son Kenneth, an important figure in Chicago’s cultural renaissance in the early 1900s. The Goodman family’s legacy lives on through the continued work and dedication of Kenneth’s family, including Albert Ivar Goodman, who with his late mother, Edith-Marie Appleton, contributed the necessary funds for the creation on the new Goodman center in 2000.