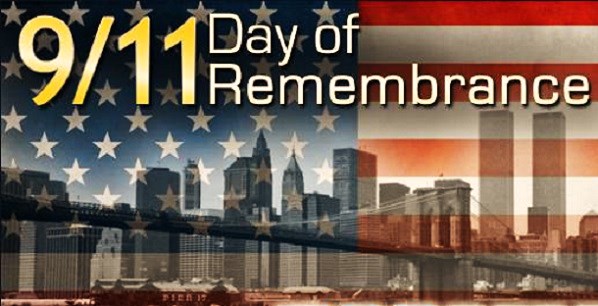 Today is the anniversary of the 9/11 terrorist attack on America.  The September 11, 2001 attacks, commonly known as 9/11, were four coordinated suicide terrorist attacks carried out by the militant Islamic extremist network al-Qaeda against the United States.

WARNING: THIS VIDEO CONTAINS GRAPHIC IMAGES THAT SOME MAY FIND DISTURBING.

The Falling Man refers to a photograph taken by Associated Press photographer Richard Drew, depicting a man falling from the North Tower of the World Trade Center at 9:41:15 a.m. during the September 11 attacks in New York City.

The subject of the image – whose identity remains uncertain, although attempts have been made to identify him – was one of the people trapped on the upper floors of the skyscraper who apparently chose to jump rather than die from the fire and smoke.

As many as 200 people jumped to their deaths that day; there was no time to recover or identify those who were forced to jump prior to the collapse of the towers.

Officially, all deaths in the attacks except those of the hijackers were ruled to be homicides (as opposed to suicides), and the New York City medical examiner’s office stated that it does not classify the people who fell to their deaths on September 11 as “jumpers”: “A ‘jumper’ is somebody who goes to the office in the morning knowing that they will commit suicide… These people were forced out by the smoke and flames or blown out.”

9/11: The Falling Man is a 2006 documentary film about the picture and the story behind it. It was made by American filmmaker Henry Singer and filmed by Richard Numeroff, a New York-based director of photography. The film is loosely based on Junod’s Esquire story. It also drew its material from photographer Lyle Owerko’s pictures of falling people.

WARNING: THIS VIDEO CONTAINS GRAPHIC IMAGES THAT SOME MAY FIND DISTURBING.