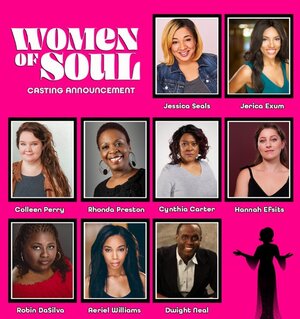 MERCURY THEATER CHICAGO ANNOUNCES
CASTING AND ARTISTS FOR
WOMEN OF SOUL – WITH A SPECIAL TRIBUTE TO ARETHA
A soulful musical salute Written and Directed by Daryl D. Brooks
with Musical Direction by Robert Reddrick

Women of Soul is a celebration of the most powerful women of soul to ever grace the stage. Audiences will jump to their feet to honor dozens of incredible women including Whitney Houston, Donna Summer, Diana Ross, Janet Jackson and Janis Joplin. This musical features powerhouse performers singing legendary music including “I Say a Little Prayer,” “I Will Survive” and “Respect.” This musical revue recognizes the struggles and triumphs these women went through to reach the pinnacle of success. This is a once-in-a-lifetime musical masterpiece that audiences will remember for years to come.

Writer and Director Daryl D. Brooks is delighted to revisit this hit show:

“Women of Soul had its world premiere at Black Ensemble Theater in 2018. This feel-good revue is being given an exciting new life and the chance to be seen by new audiences at Mercury Theater Chicago. The production is a tribute to iconic female artists. Audiences will celebrate these artists performed with love and passion by Chicago’s favorite performers,” comments Daryl D. Brooks.

Tickets for Women of Soul, starting at $35, are on sale now at the box office, 3745 N. Southport Avenue in Chicago, http://www.mercurytheaterchicago.com.

Music Director Robert Reddrick is the music director and drummer for Chicago’s Black Ensemble Theater. He is a seven-time recipient of the Black Theater Alliance Award, and five-time Jeff Award nominee for musical direction. He has been music director for projects at Steppenwolf Theatre, University of Illinois, Free Street Theater, and drummer for many other productions throughout Chicago. He also performs with his band The R2Project featuring Bonnie Phillips.

Aeriel Williams recently returned from New York where she played Diana Ross in the off-Broadway production of Trevor the Musical.

Cast member Jerica Exum was in the national tour of Waitress and has been seen locally at Black Ensemble and Paramount, where she performed in Cinderella and Newsies.

Rhonda Preston has performed with Black Ensemble Theater for 25 years. She has traveled internationally, performing with Blues band Mississippi Heat and Gospel favorite Tina Brown and the Gospel Messenger.

Robin J. DaSilva was awarded the 2019 Jeff Award for playing the title role in Mahalia Jackson: Moving Through the Light at Black Ensemble. She has also performed at Porchlight, Theater at the Center and Theo Ubique, among others. As a vocal arranger, she has worked with many churches, recording artists, commercial, television shows and musical theatre productions.

COVID PROTOCOL: For the safety and comfort of patrons and staff, Mercury Theater Chicago will be requiring audience members to provide proof of vaccination either with a physical copy of the vaccination card or on a smartphone. In addition to proof of vaccination, all guests 18 years and older must present a government-issued ID, such as driver’s license or passport. Guests under 18 may also use a school photo ID. People with a medical condition that prevent vaccination may provide proof of a COVID-19 PCR test taken within 72 hours of the performance start time or a negative COVID-19 antigen test taken within 6 hours of the performance start time. All patrons will have to wear a mask throughout the performance when not actively eating or drinking regardless of vaccination status.

The building that houses the Mercury opened in 1912 as a silent film nickelodeon, named The Blaine Theatre after actor and former Senator and Secretary of State James G. Blaine. The Blaine became obsolete when talking pictures became popular nationwide in 1928. The building served a variety of uses until 1994, when it was purchased by theater producer Michael Cullen and transformed into a live theatre, named the Mercury Theatre.