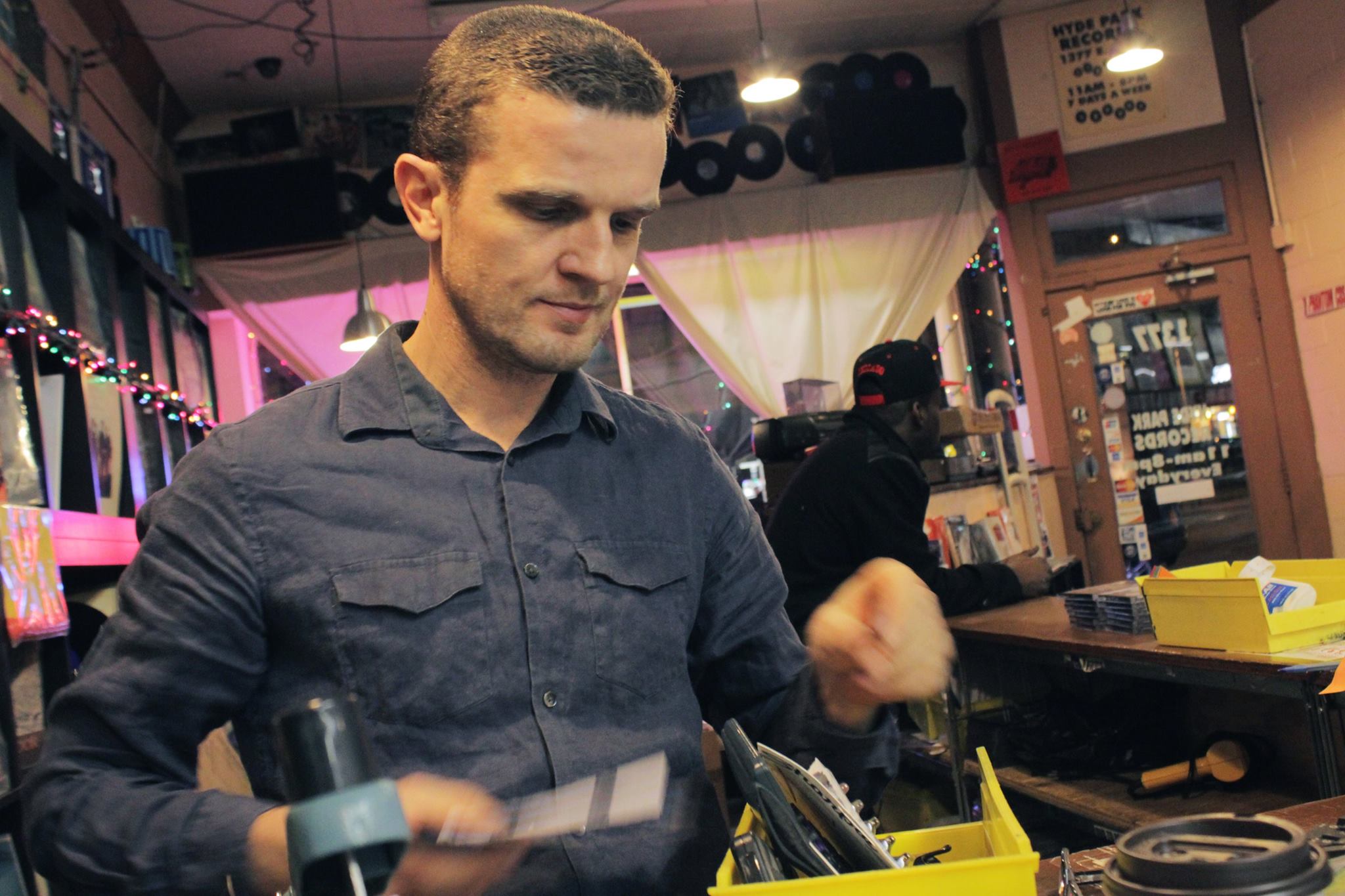 GO BANG! Magazine founder Pierre Andre’ Evans recently approached Hyde Park Records owner Alexis Bouteville, in hopes that Hyde Park Records would stock and sell his debut book “INSIDE THE MINDS OF ENTERTAINERS.”  Alexis responded that he was more than happy to support local talent and would definitely place the book in his front window, on full display!  That’s the kind of support we ALL need!

You can purchase “INSIDE THE MINDS OF ENTERTAINERS” at Hyde Park Records and on Amazon:    https://www.amazon.com/Inside-Mind-Entertainers-Book-ebook/dp/B07JGDT18X/ref=sr_1_1?dchild=1&keywords=inside+the+mind+of+entertainers+pierre+andre+evans&qid=1601488870&sr=8-1

The following is a reprint of the Chicago Reader “Faces of 53rd Street” advertisement:
VIDEO/AD LINK:  https://www.chicagoreader.com/chicago/hyde-park-records-53rd-street/Content?oid=53837742

You could say that Alexis Bouteville, owner of Hyde Park Records, discovered Chicago by way of Paris. Alexis had a record store in his native France and was going on frequent buying trips in the United States to keep the store stocked. Chicago always had the best selection of unique vinyl, and it wasn’t long before he fell in love with Hyde Park and the whole South Side area.

In 2011, Alexis took over the existing Hyde Park neighborhood record store that had been there since the 1970s – Second Hand Tunes – and renamed it as Hyde Park Records. Located at 1377 E. 53rd Street, the store is always listed as one of the best independent record stores in the city. Thrillist referred to it as “…everything a neighborhood record shop should be. With live DJs, a chummy community vibe, and a bangin’ selection of wax never short on hip hop or international flair, there’s always something happening at this crate digger’s paradise… If anyone tries to tell you all record stores are the same, a visit here provides for an unimpeachable rebuttal.” Alexis explains that Hyde Park Records “… specializes a lot in older music and vinyl, and especially R&B, blues, and jazz. We also sell a lot of tapes so everything vintage is really coming back.” The store also buys used records, and on any day you can see Alexis expertly (and very quickly!) flipping through collections to find the rare records he knows his customers want, as the owners look on hopefully.

A recent Chicago Reader article noted that local rapper Vic Mensa counts Hyde Park Records as one of his favorite neighborhood hangouts from when he was a young kid. He started coming to the store when he was just 11 or so and it “…helped (him) develop his diverse musical taste.” And Mensa is not the only one. Hyde Park Records is more than just a record store – it’s an important part of the neighborhood, ingrained in so many music lovers’ lives. Alexis says, “The store is also a great place for people to meet…to talk and share about music, musicians, DJs, (and) producers – people need a place like this. The community interaction aspect is one of his favorite parts of being a small business owner in the neighborhood, and Alexis adds, ”To go further south is different, further west is different, further north is different. (Hyde Park) is really a little town within Chicago.”

It’s not uncommon to find customers making buying trips from as far away as Europe and Japan. Wellknown hip hop producers DJ Spinna, Pete Rock, and Large Pro are regular customers from New York, as well as DJ QBert from San Francisco.