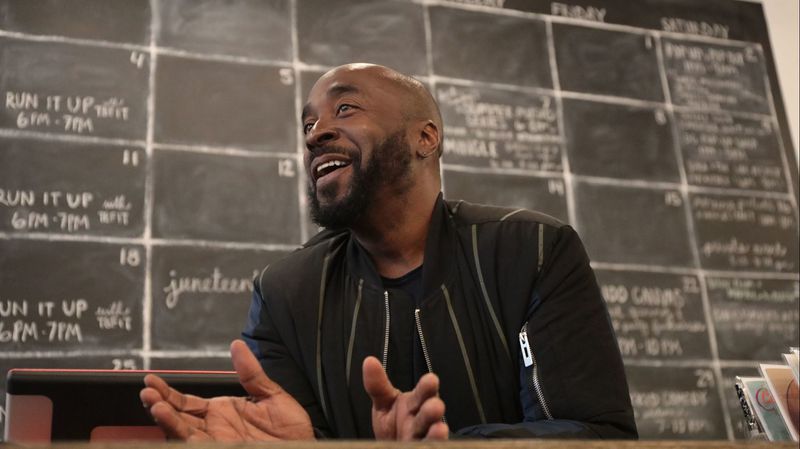 Williams is currently strategizing concepts that will help to revitalize Chicago’s South and West side communities and fuel their economic growth through retail, arts and culture. Williams holds a degree in Finance from the University of Illinois at Chicago.

GO BANG! Magazine: Why do you feel the need to be involved in your community?

Eric Williams: TO BE AN EXAMPLE. IT’S IMPORTANT FOR PEOPLE TO SEE A SMALL BLACK OWNED BUSINESS AND A POSITIVE PLATFORM IN THE COMMUNITY.

GO BANG! Magazine: One of your missions in business is to help revitalize Chicago’s South and West sides. Why did you choose those specific areas?

Eric Williams: THE CONSTANT DISINVESTMENT IN THESE CHICAGO NEIGHBORHOODS HAVE RESULTED IN STRUGGLING COMMUNITIES. WE HAVE TO COMBAT THAT BY CREATING WHAT WE WANT FOR OUR NEIGHBORHOODS.

GO BANG! Magazine: What motivated or inspired you to create The Silver Room?

Eric Williams: I WANTED TO HAVE A SPACE FOR ALL OF MY PASSIONS, A PLACE TO MEET PEOPLE AND MERGE ART, FASHION, CULTURE AND COMMUNITY TOGETHER.

GO BANG! Magazine: The original Silver Room was located on the North side of Chicago. Currently, it’s located in Hyde Park on the South side. What do you believe is the reason your business is so successful in Hyde Park?

Eric Williams: CULTURAL COMPONENTS OF THE STORE ALIGN WITH THE MERCHANDISE. THERE IS A BETTER UNDERSTANDING OF WHAT WE STAND FOR. PEOPLE IN HYDE PARK WANT TO SUPPORT BLACK BUSINESSES.

GO BANG! Magazine: You’re a DJ and I noticed that you incorporated a DJ booth in your store. How has being a DJ influenced you as a businessman?

Eric Williams: MUSIC IS A PASSION OF MINE, WHETHER IT’S SELLING OR PLAYING RECORDS THAT MAKE PEOPLE DANCE OR MIXING IT UP WITH SOMETHING THEY HAVEN’T HEARD BEFORE. TO DJ IS A CRAFT. THE DJ BOOTH INVITES PEOPLE IN TO PRACTICE THAT SKILL.

GO BANG! Magazine: One staple of summer in Chicago is “The Silver Room Block Party,” which started in 2004. This year, due to the Covid-19 pandemic, it was canceled. What drove you to create the festival and what is your main goal when presenting it each year?

Eric Williams: THE “BLOCK PARTY” WAS A RESPONSE TO CHICAGO FESTIVALS THAT LACKED INCLUSION. I WANTED SOMETHING VIBRANT AND DIVERSE THAT UNIFIES THE COMMUNITY.

GO BANG! Magazine: How can the public help support The Silver Room during these unprecedented times?

GO BANG! Magazine: As a young, black, male running several businesses, you are an inspiration and motivation to people, especially people of color. How does it feel to know that your success inspires others to succeed?

Eric Williams: IT’S IMPORTANT TO HAVE EXAMPLES AND A PRESENCE IN THE COMMUNITY. I HOPE TO INSPIRE OTHERS TO SUCCEED IN SIMILAR WAYS.

GO BANG! Magazine: Five years from now, where do you see Eric Williams?

Eric Williams: STILL GOING STRONG, BUILDING THE NON-PROFIT PROXIMITY THAT WILL SUPPORT OTHER BUSINESS, AND WORKING ON A MULTITUDE OF BUSINESSES WITH PLATFORMS FOR OTHER WAYS OF ENTERTAINMENT.

Eric Williams: ON A PERSONAL LEVEL, I’VE BEEN ABLE TO REST AND REFLECT. I’VE ADJUSTED. I STILL HAVE TO MAKE THINGS HAPPEN. THE SHUTDOWN GAVE US THE OPPORTUNITY TO REMODEL AND FOCUS ON ONLINE SALES.

GO BANG! Magazine: Most businesses had to temporarily close due to the Covid-19 pandemic. Some businesses even went out of business. During the pandemic the George Floyd murder took place in Minnesota, which caused protests and riots across the world, including here in Chicago. How has the pandemic and the riots affected The Silver Room?

Eric Williams: EVEN WITH THE CHALLENGES OF THE PANDEMIC, WE’VE BEEN ABLE TO FOCUS ON SOME CHANGES TO ENHANCE THE STORE. WHAT HAPPENED TO GEORGE FLOYD SHED A LIGHT ON SOME INEQUITIES IN SOCIETY FOR SOME WHO WEREN’T AWARE.

WE SEE MORE CUSTOMERS INTERESTED IN AND BUYING BOOKS ABOUT RACE. WE’VE HAD MORE SUPPORT FROM PEOPLE WHO MAY NOT HAVE PREVIOUSLY SHOPPED WITH US.

GO BANG! Magazine: Since The Silver Room re-opened in late June, it has been remodeled and has a fresh new look. What are you hoping for your space with its new fresh look?

Eric Williams: I WANT THE SPACE TO BE INSPIRING. I WANTED TO CREATE BEAUTY ON THE SOUTH SIDE. IT’S A REFRESHING AND SLEEK SHOPPING EXPERIENCE, WITH THE SAME VIBE.

Eric Williams: ANYBODY WITH ANY SENSE OF COMPASSION KNOWS WHAT HAPPENED WAS WRONG. THERE NEEDS TO BE REFORM AND BETTER TRAINING AND HIRING PRACTICES IN LAW ENFORCEMENT. WE LIVE IN A VIOLENT SOCIETY AND THIS HAS MADE PEOPLE TAKE A SECOND LOOK AT THESE ISSUES.


YOU CAN FOLLOW THE SILVER ROOM ON ALL SOCIAL MEDIA FORMATS: @TheSilverRoom

All photos courtesy of:  ChrisJasper.com   Bringing back the funk…”Raise The Bar…the Title Track from Chris Jasper’s 17th solo album “Raise The Bar” available on CD and Vinyl at ChrisJasper.com (Free Domestic Shipping). Also available at iTunes, Amazon and More! If you are familiar with THE ISLEY BROTHERS, then you know Rock & Roll Hall […]

Photo courtesy of: PBS.ORG Queen Elizabeth II, the longest-reigning monarch in British history, died Thursday, September 8. She was 96 years old. Queen Elizabeth II’s life was full of notable achievements, even before she became the Queen. During World War II (which ended when she was 19) Queen Elizabeth — princess Elizabeth at the time […]

Our visit to the White House – BARACK & MICHELLE OBAMA

Photo courtesy of: OBAMA.ORG   Hi Pierre, Today, Michelle and I returned to the White House together for the first time since leaving office, to join President and Dr. Biden in unveiling our official portraits. These portraits have a special significance, because they will hang in the White House alongside portraits of other presidents and […]

All photos courtesy of:  Emanuel Love Dee Jay Alicia (DJA), a Chicago native, developed a love for music at a young age. Her musical beginnings were rooted in Soul, Steppers, and R&B. She began her DJ career in 1996 under the guidance of her mentor and then husband DJ Raphael. When she was properly prepared […]